The Governed V Governing (GVG) series highlights & explores the timeless struggle between chaos and oppression – between ‘us’ and ‘them.’

GVG showcases the epic 8-year and still on-going battle for control between the Bundy & Finicum families and their supporters and Local, State, and Federal Governing. Find out who wins and determines the balance between chaos & oppression! 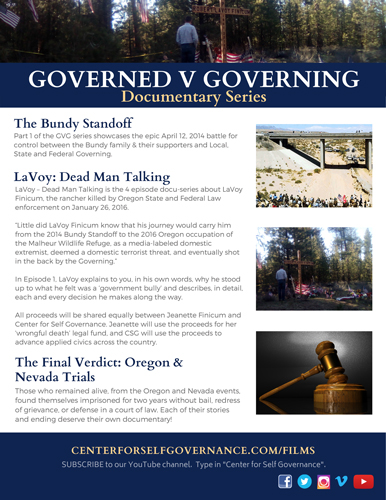 Part 1 of the GVG series showcases the epic April 12, 2014 battle for control between the Bundy family & their supporters and Local, State and Federal Governing.

LaVoy – Dead Man Talking is the 4 episode docu-series about LaVoy Finicum, the rancher killed by Oregon State and Federal Law enforcement on January 26, 2016.

“Little did LaVoy Finicum know that his journey would carry him from the 2014 Bundy Standoff to the 2016 Oregon occupation of the Malheur Wildlife Refuge, as a media-labeled domestic extremist, deemed a domestic terrorist threat, and eventually shot in the back by the Governing.”

In Episode 1, LaVoy explains to you, in his own words, why he stood up to what he felt was a ‘government bully’ and describes, in detail, each and every decision he makes along the way.

© 2021 Center For Self Governance. CSG is a educational 501(c)(3) organization. All Rights Reserved. Site customized by Lindsey Owen White

Every donation makes an impact! Consider CSG in your 2021 year-end giving.